The Sylvicultural and Environmental Committee of the Society for the Forests of the Great Plain organized a demonstrative event on 17th June 2015 near Csanytelek (Hungary) that belongs to the territory of the DALERD Forestry Zrt.

The programme  started with a welcome speech by József Fazekas, the deputy CEO for production  at the DALERD Zrt. 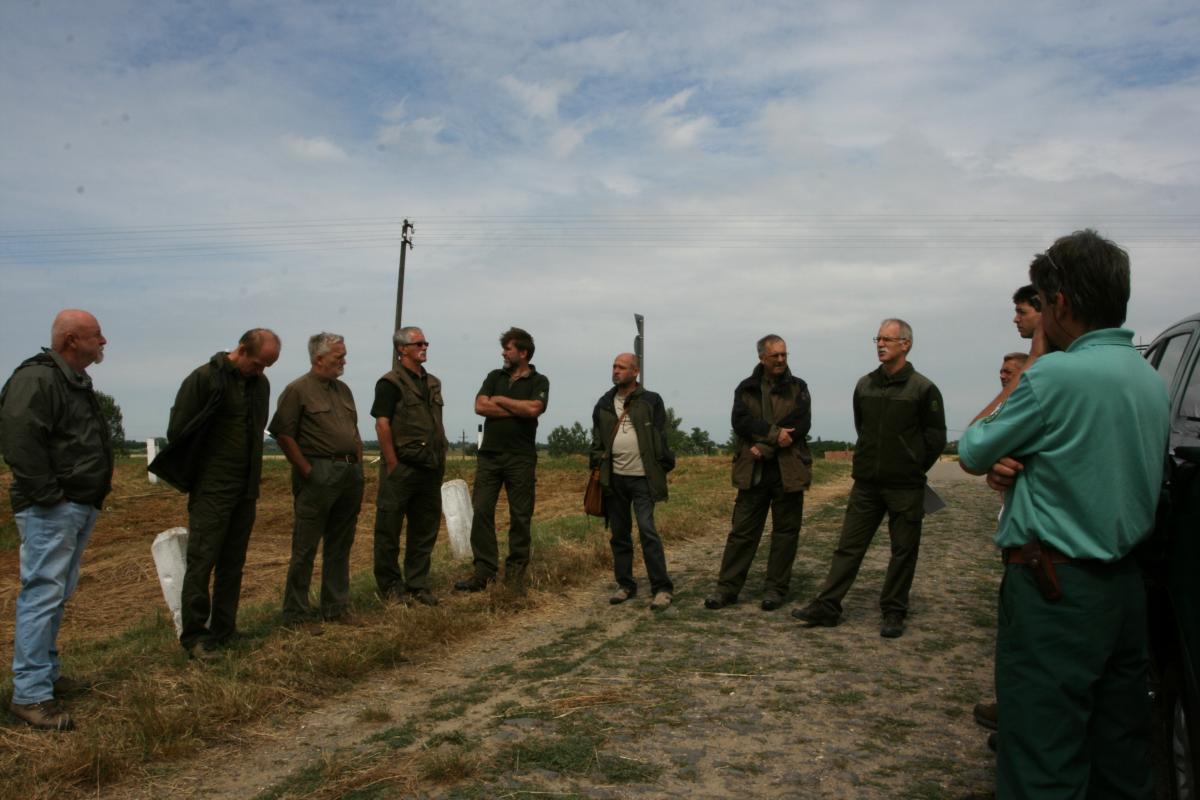 The next speech was given by Péter Pál Sütő, project manager. He gave a detailed introduction to the habitat reconstruction measures that are planned to take place in 13 forest compartments (covering cca. 60,000 hectares). The most important activities include the removal of invasive plants, the planting of native tree species, and the maintenance of the roughly 8 hectares of forest clearings. 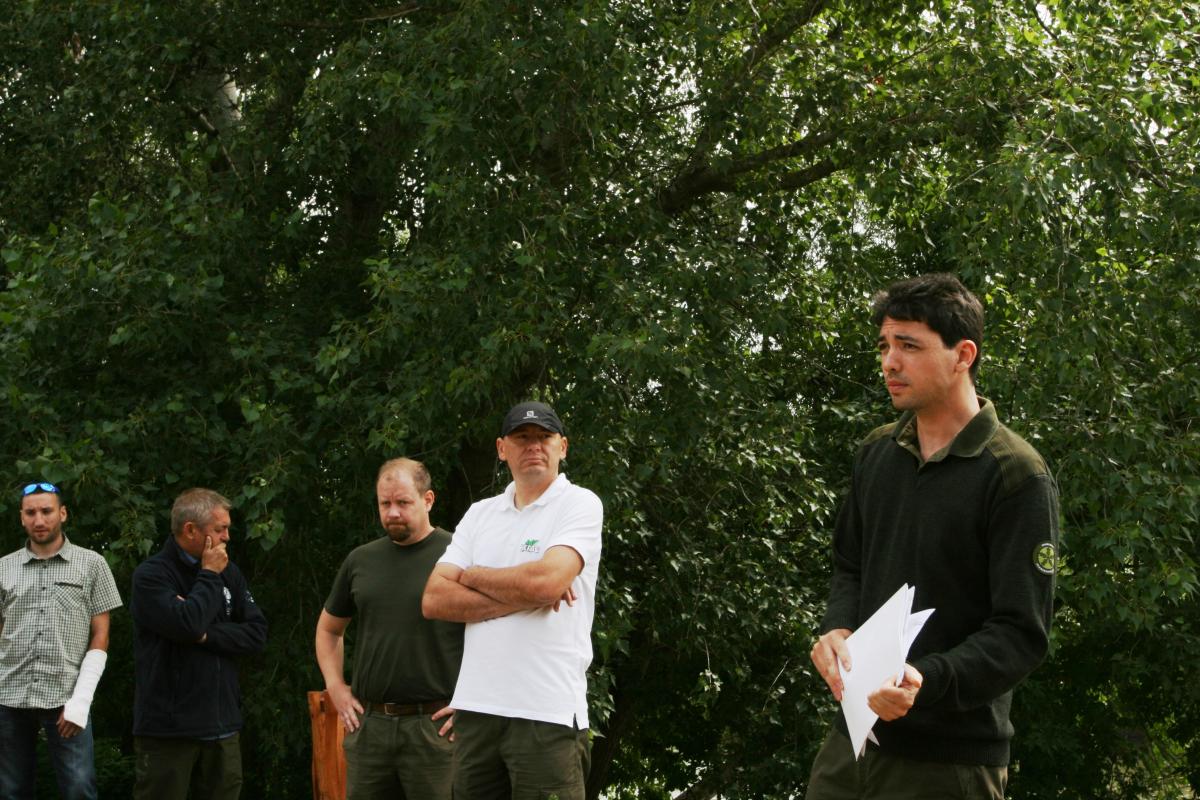 Béla Tokody talked about the roller conservation project, with regards to the species’ ecological characteristics, habitat requirements, the main causes of the population decline, and the necessary conservation measures. 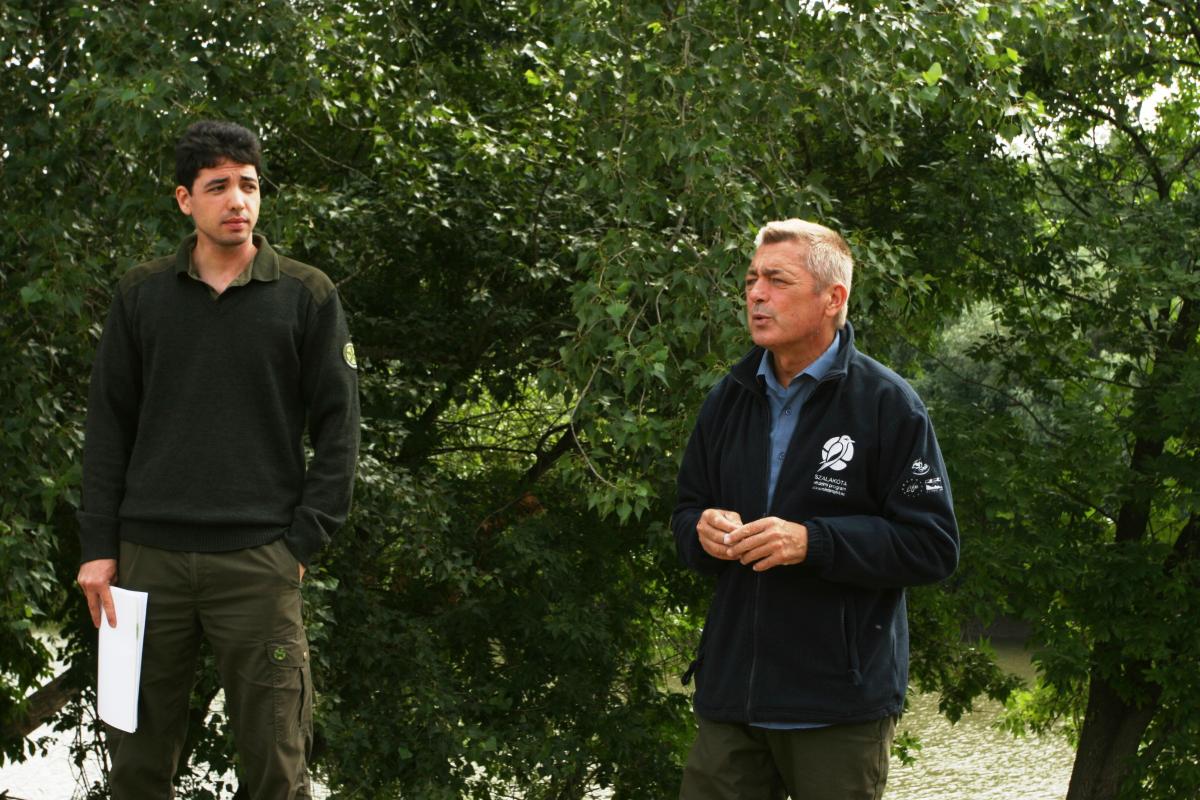 László Tajti, the deputy director for land stewardship at the Kiskunság National Park gave a talk on the protected values of the Pusztaszer Landscape Protection Area. 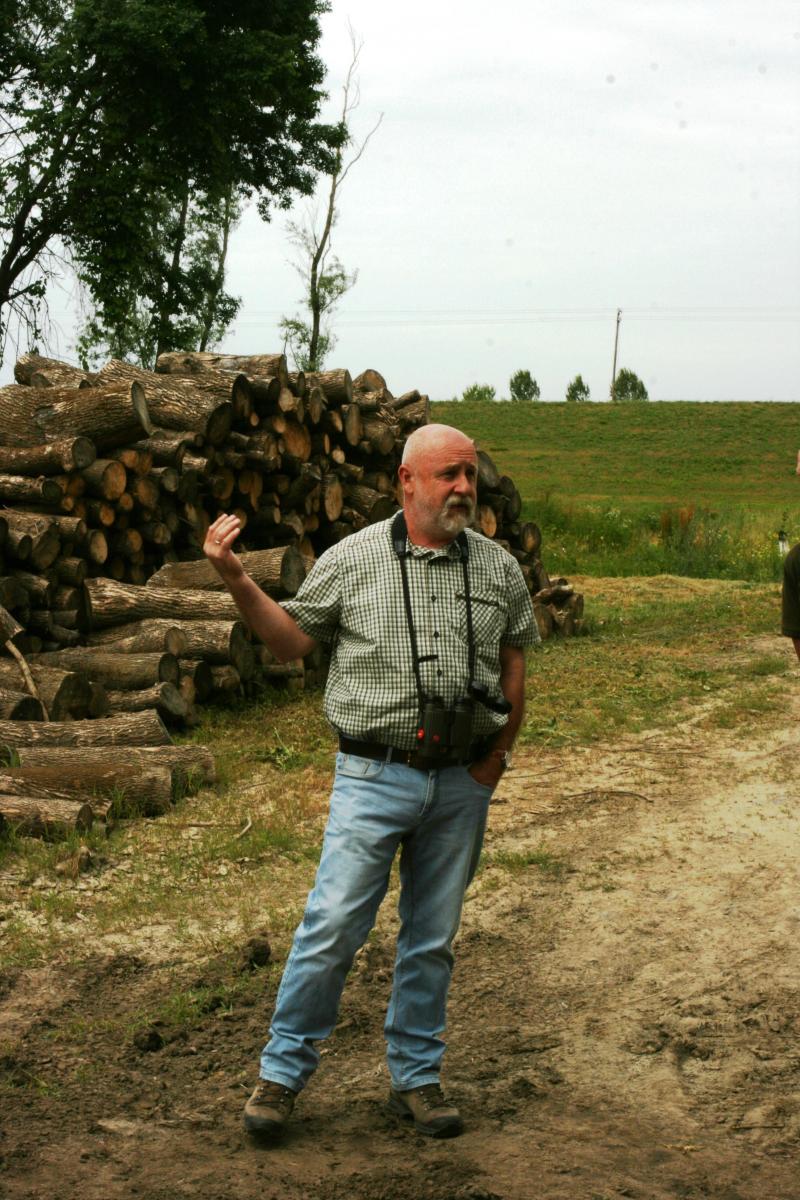 László Tajti talks about the natural assets of the area.

The talks were followed by a demonstration given by István Szidonya (SM Consulting Ltd.) on the technology of chemical injection in invasive control. 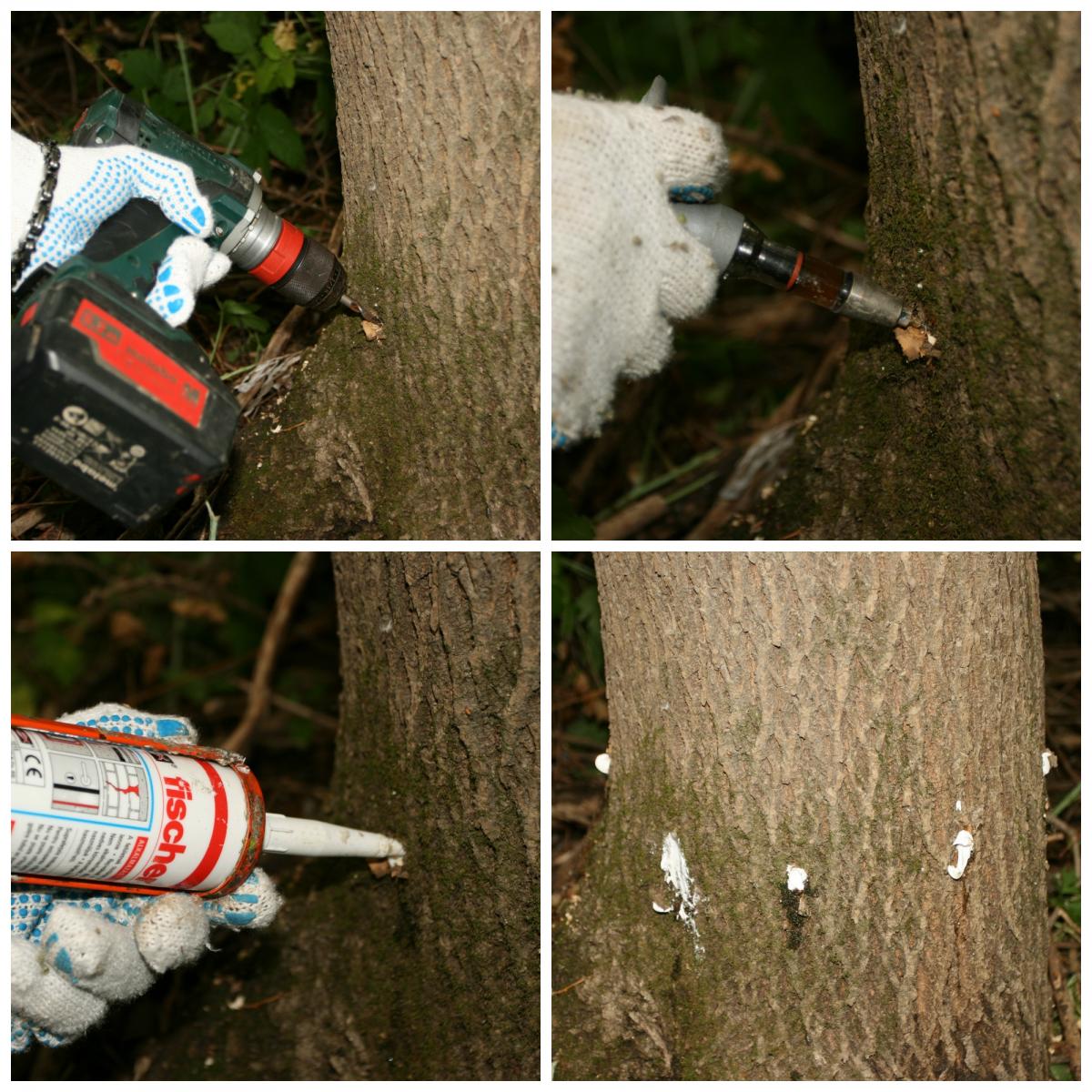 The injection technology itself has been successfully used for about 8-10 years, but its application had been unprecedented for the invasive species of this region (box elder and green ash). For this reason, the improvement of the chemical compound is still ongoing. The injection technique is superior to the well-known stump treatment as it needs only a fraction of the chemicals required by the other method and – apart from preventing sprouting from the stump, it also prevents root sprouts. Furthermore, injection can be carried out with almost no disturbance to the surrounding vegetation. 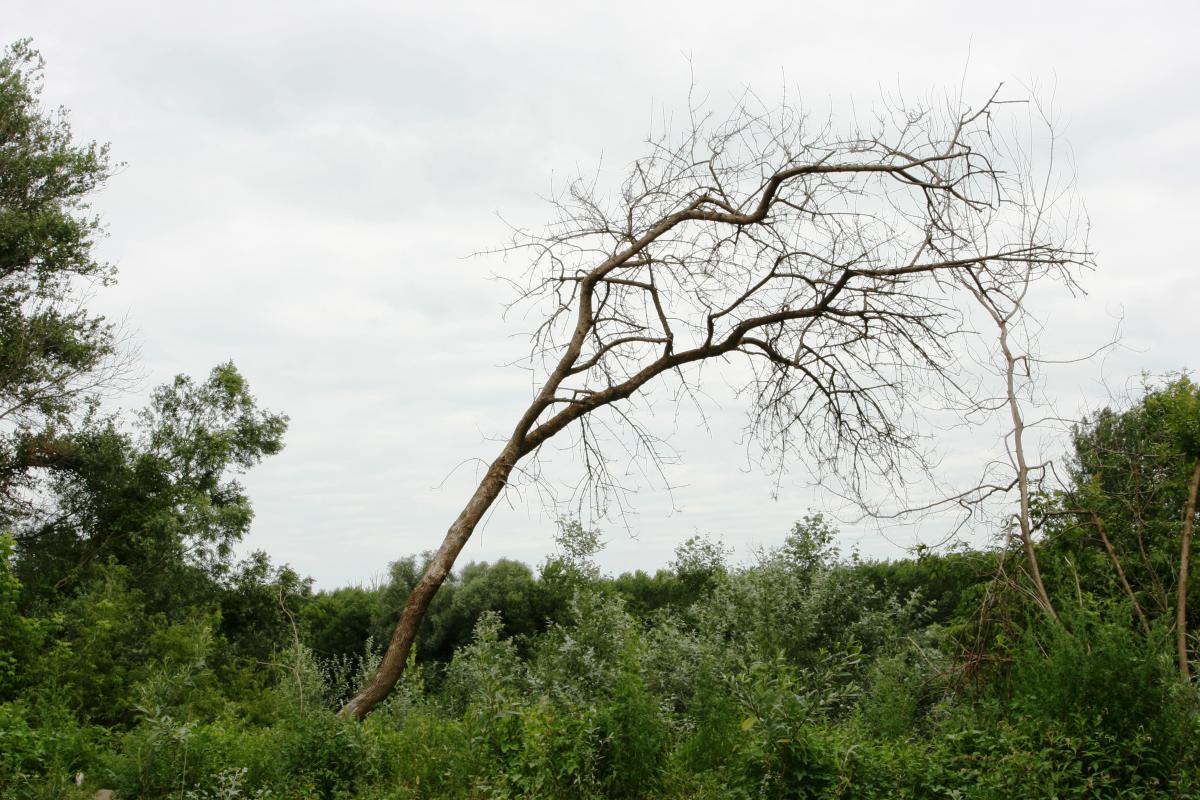 It is obvious that the vegetation surrounding the injected tree has not suffered any harm.

After the demonstration, we took a walk around the project site. We could observe the newly acquired forestry tractor in operation. It is a useful asset to the maintenance of the clearings since it is capable to cop up smaller trees. 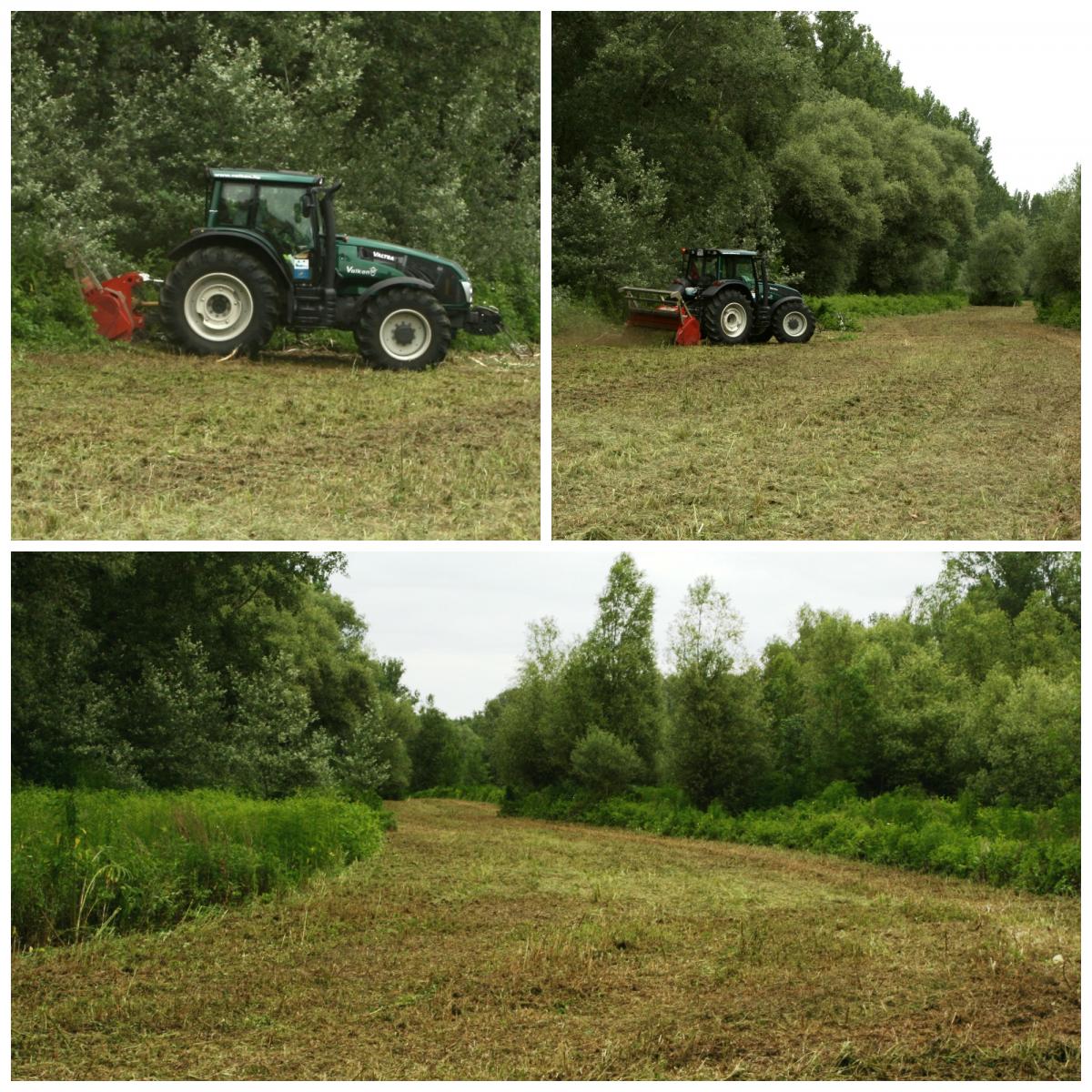 Forestry tractor at work – and the results.

The majority of the 60,000 hectares designated for management serves primarily conservation purposes, as well as embankment protection, and Natura 2000 purposes (not timber production). A significant proportion of the native willow trees are decaying, allowing the green ash and the box elder to gain grounds. The problem is further aggravated by the bramble, the wild wine, and the false indigo bush.

The injection technique proved to be sufficient in those parts of the forest where the invasive species are only present in a small amount. Those places however, where they formed continuous patches, had to be clearcut. 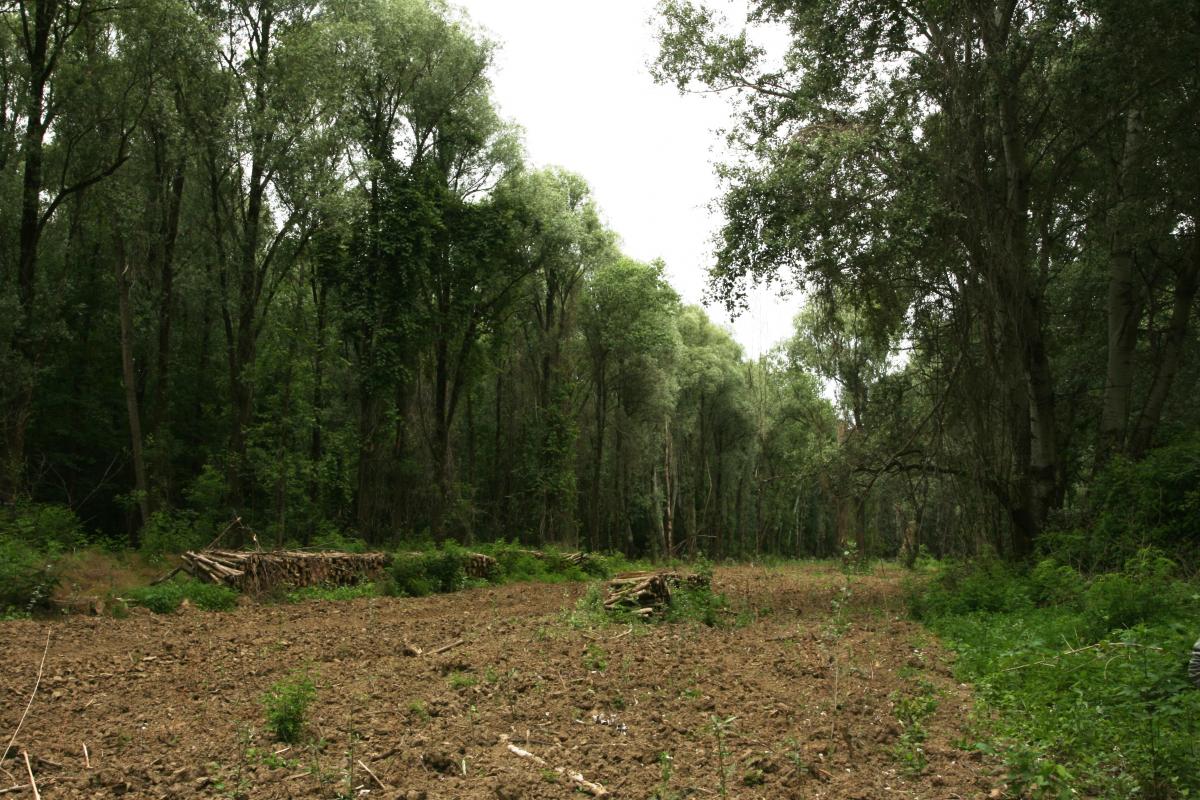 Felled trees were replaced with native saplings (white willow, grey and black poplar) wherever the canopy closure fell below 80% due to the removal of invasive specimens. Saplings were planted in rows to facilitate tending in the future. The new plantations will have to be kept free of bramble, box elder and green ash seedlings that will surely appear between the rows. For the next five years, the planted saplings will have to be taken good care of, otherwise the invasive species shall crowd them out. 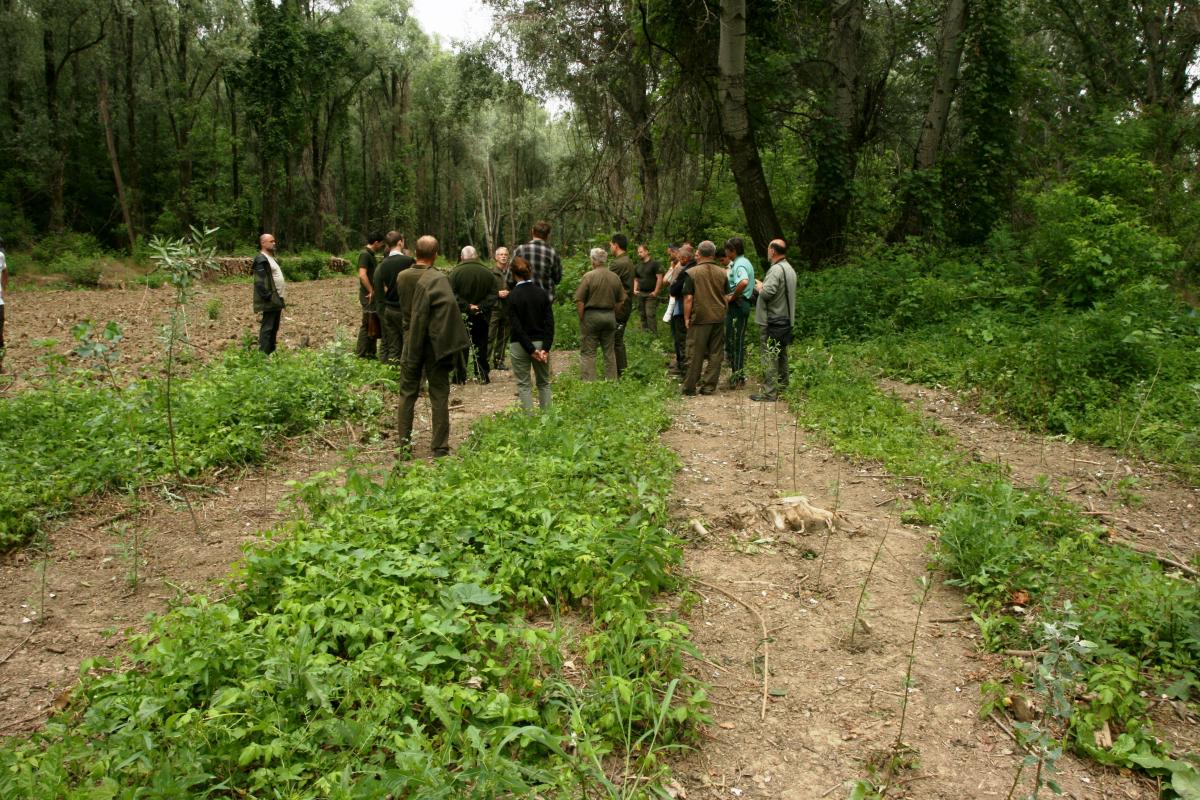 The event was rounded off by a hearty lunch in Ópusztaszer.