AN INSIGHT INTO THE LIVES OF THE ROLLERS OF SOUTHEASERN ROMANIA

The data collection process, targeting the migration routes, and wintering sites of the rollers breeding in the Carpathian Basin has started in 2016.

So far, more than ten individuals were tagged across the project sites of Hungary and Western Romania, making sure that the main regions within the species distribution are represented by this sample. By the end of the project we will have an adequate number of individuals tagged to enable us to better understand the  migration routes, the migratory behaviour and the wintering sites. 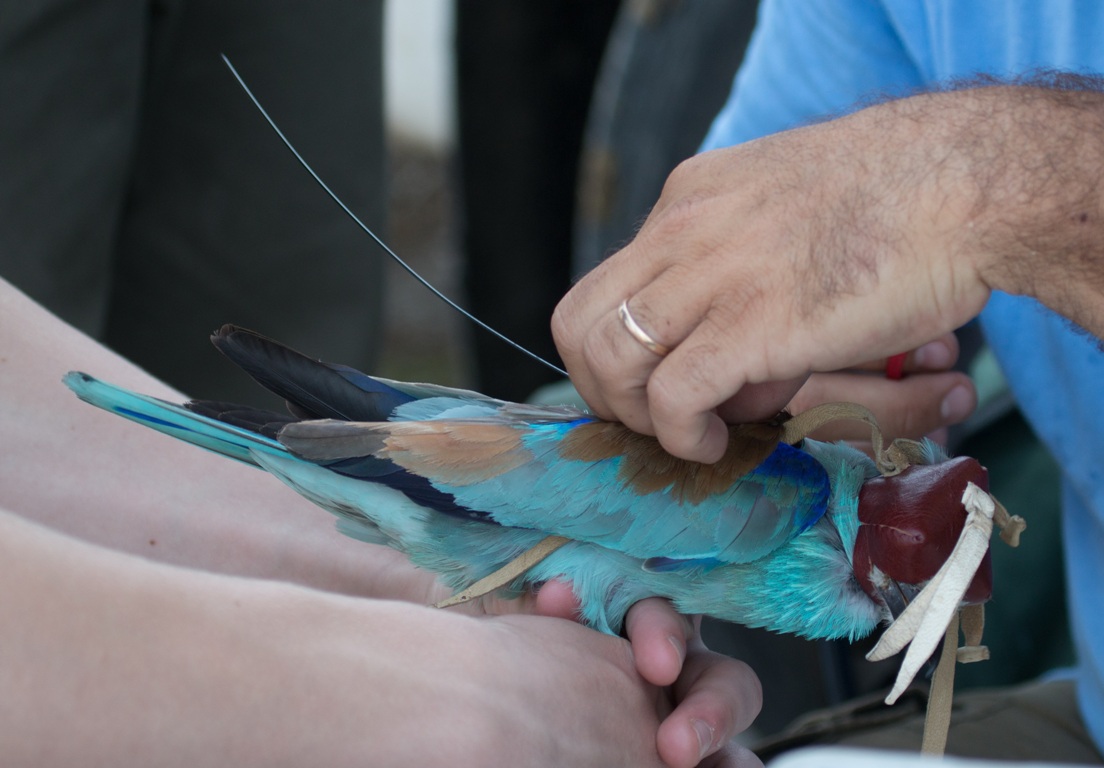 A final check on the tag before release (Photo: Attila Nagy).

While the roller is only a sporadic species in western Romania, it is common, or locally abundant in the southern and south-eastern parts of the country.

At the beginning of July, the Milvus Group and staff members of the Environmental Agency of Satu Mare County organized a field trip, in order to tag three rollers from outside the Carpathian Basin. The team was planning to tag a bird from Dobrudja, one from Bărăgan and another from Wallachia. Previously registered colonies nesting in loess walls were visited. 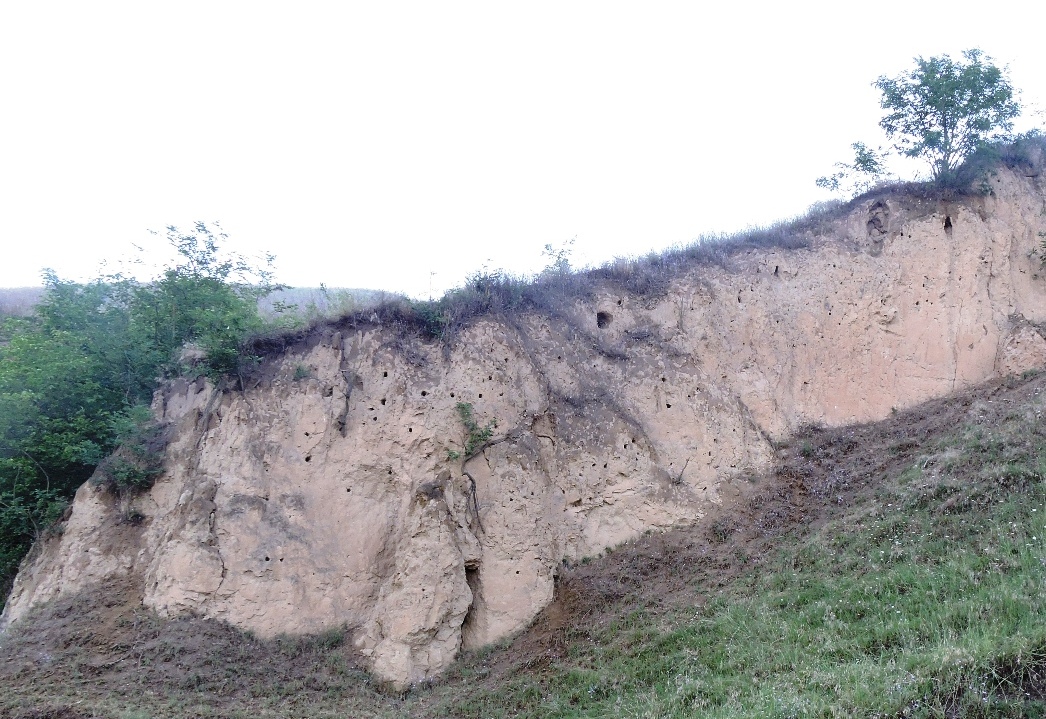 Rollers in Southern and South-eastern Romania most often breed in the cavities of loess walls. (Photo: Szilárd Daróczi J.).

As opposed to those birds within the Carpathian Basin, rollers in Dobrudja often nest in narrow and deep loess canyons in the vicinity of sheep farms (Photo: Lőrinc Bărbos). 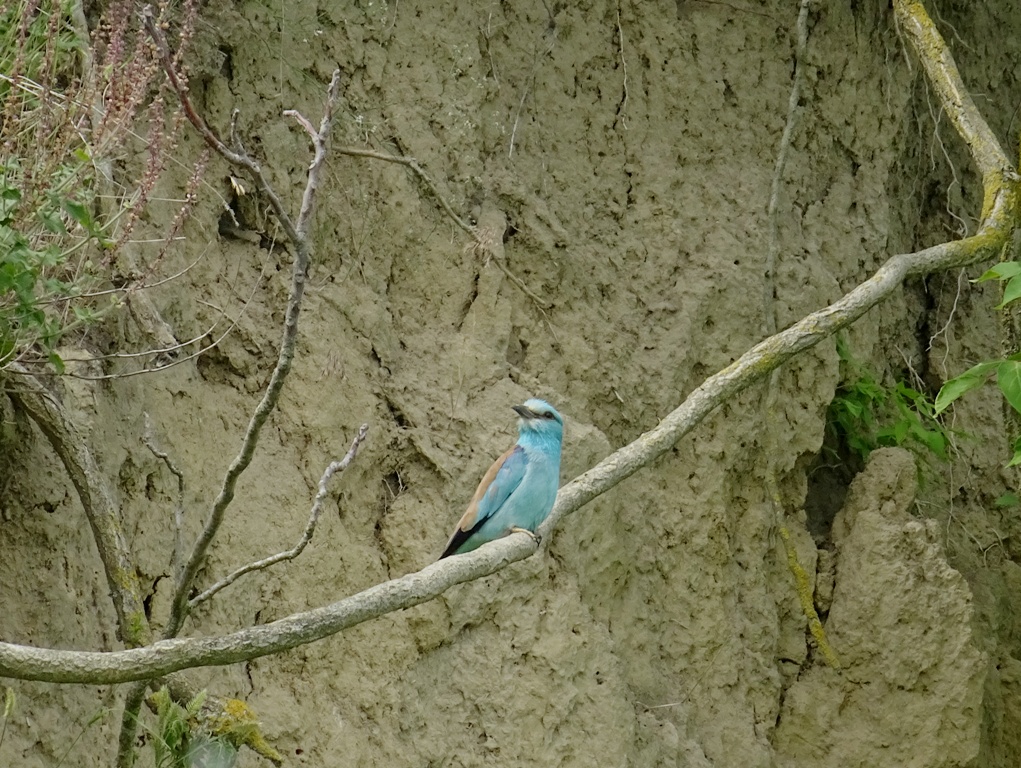 A roller guarding its nest at a the loess wall (Photo: Lőrinc Bărbos).

During our short expedition, we’ve recorded 137 roller territories in total, and found many nest sites. Most of the nests were within abandoned bee-eater tunnels enlarged by the rollers.

In the southernmost part of Romania, west of the town of Zimnicea, we found an extraordinary population density colonizing a 2.5-km-long loess wall. At this location, we observed at least 28 individuals, found 8 active nests and 3 more pairs feeding chicks. Adding all up, there was one breeding pair every 227 metres on average within this population. The nearest two nest were only 22 metres away from each other.

Another very dense breeding population was located between the settlements of Tulcea and Victoria, where 11 active nests were recorded along a 13 kilometre-long section. Ten out of the 11 nests were in loess walls, and one was in a concrete pylon.

The first roller to be tagged outside the Carpathian Basin was captured here, in the northern part of Dobrudja.  The bird received the name Viktor, after the nearby settlement of Victoria. 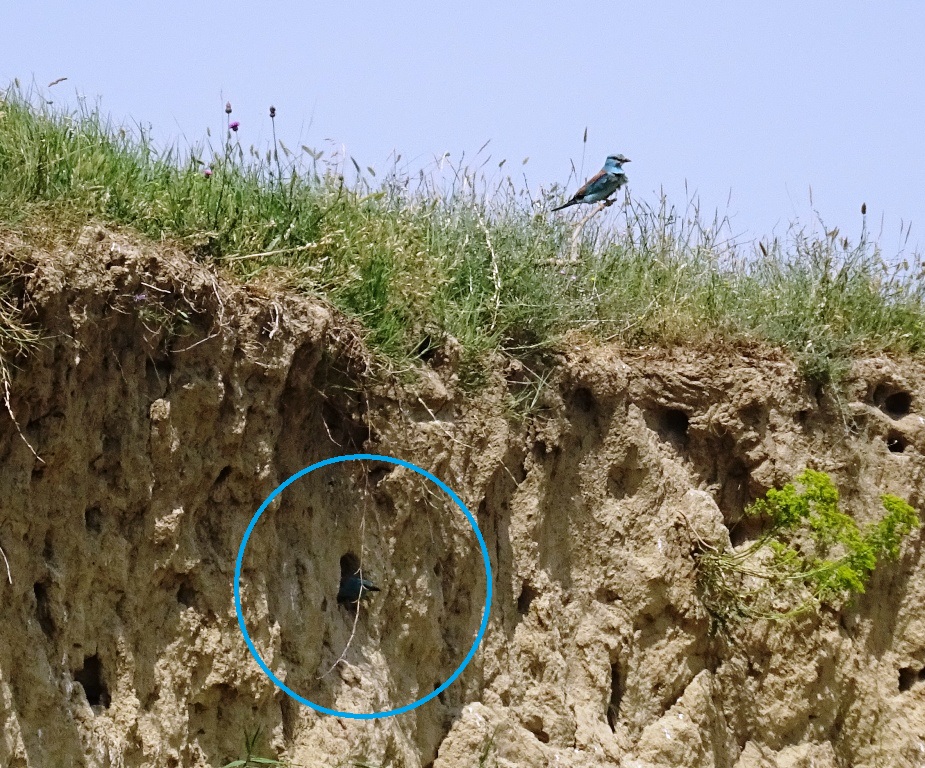 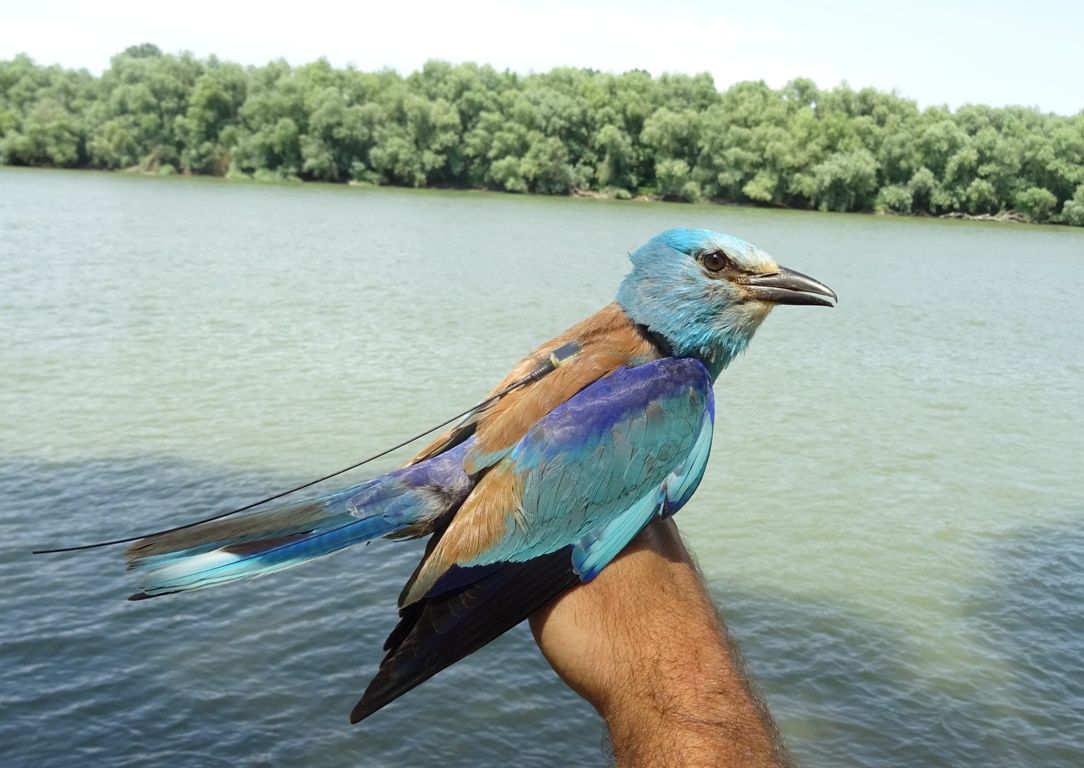 Viktor at the nest cavity before tagging (above,) and with the tag on (below) (Photo: Lőrinc Bărbos).

The second bird was captured near the settlement of Cosâmbești, in Ialomița County, at the eastern reaches of the Bărăgan Plain. This location is 135 km south-east from the tagging locality of the first bird.

This bird was named named after the nearby Bolomey Mansion, built by Italian architects in 1989 – nowadays it is a historic building.

A large storm hitting the spot right after we caught the bird forced us to carry out the tagging procedure within the vehicle.

Bolomey with his tag just before release (Photo: Lőrinc Bărbos).

The third bird was captured in the so called ‘Roller Paradise’ near the town of Zimnicea, in Southern Romania, 195 km from the tagging locality of Bolomey and 331 km from that of Viktor.

It had seemed like the easiest task of all, as we had previous knowledge of a dense population there. However, chance played out everything differently. The nesting period was well under way, the parents made quick feeding visits to the nests. These visits were only for 5-8 seconds long, with the adults very rarely staying inside the nest for 10 seconds.

Even though we arrived at the site at dawn, and tried trapping at several active nests, we only managed to capture a bird in the afternoon.

Eventually, we managed to capture the focal pair by mist netting. The tagged bird was named Kondás (Swineherd), after the nearby pig farm.

The behaviour of rollers breeding outside the Carpathian Basin is different to those breeding in Western Romania in many aspects. These populations often choose loess wall cavities for nesting which is unprecedented within the project site. Due to the extremely dense breeding colonies, the roller can probably be viewed as a common breeding species despite the large expanses of monocultural fields. This type of habitat is avoided by rollers in Western Romania. Furthermore, these birds were not as wary either: they often carried on with their feeding activities with the observers only 15 -20 metres away from the nests.

The tagged birds can soon be followed on the   www.satellitetracking.eu. website. We are curious to see whether their migration routes and wintering areas are different to those tagged within the Carpathian Basin.