The journey of our satellite tagged rollers

The animated migration map at the www.satellitetracking.eu website shows the Hungarian birds starting their journey in the beginning of September and crossing the Sahara desert within a week. Surprisingly they’ve been spending a much longer time in the Sahel belt, south of the Sahara than expected. Their movement pattern indicates that they have found an ideal habitat to replenish their energy stores. The lush savannah offers plenty of food and shelter after the wet season in the end of the summer. 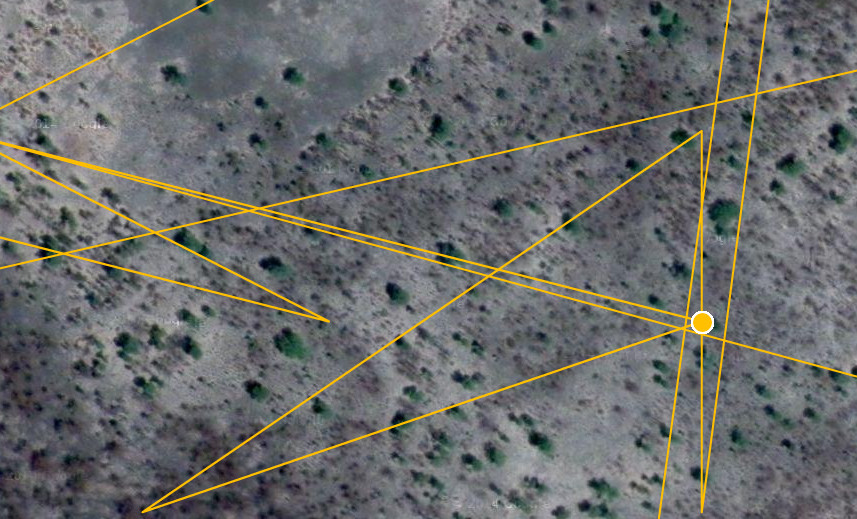 The current habitat of “Csele”,  savannah interspersed with trees and shrubs.

The two tagged birds spent the last month in the southern part of Chad and Sudan. Since this is the first time we can track their migration, we’re eager to know whether they’ll continue their journey towards southern Africa, their suspected wintering grounds. 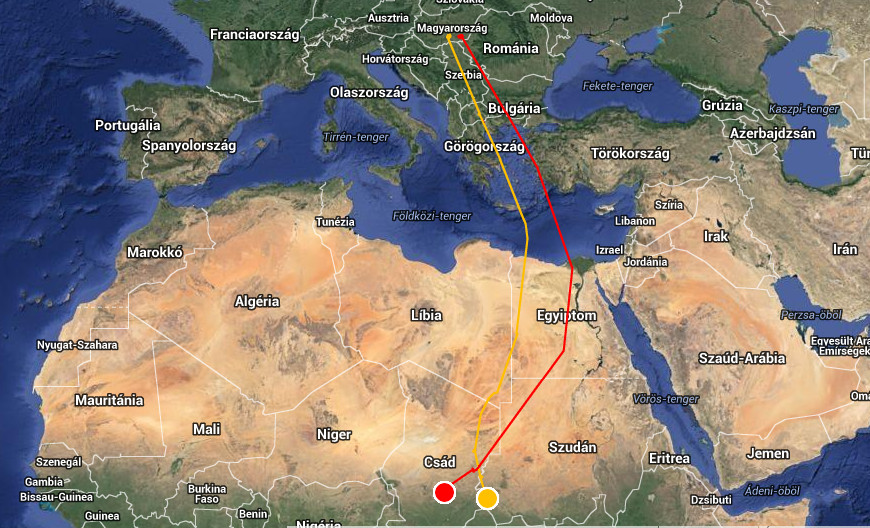 The journey that "Pétör" (red) and "Csele" (yellow) had taken so far.

It’s worth comparing the route of the Hungarian birds with those satellite tagged as part of a Spanish project in 2011-2014. The map below clearly shows that some of the Spanish rollers prefer to take a westerly route along the edge of the Sahara, whilst others cross the desert to save precious time. The two groups however unite around Chad, before continuing  their journey further south towards their wintering grounds. 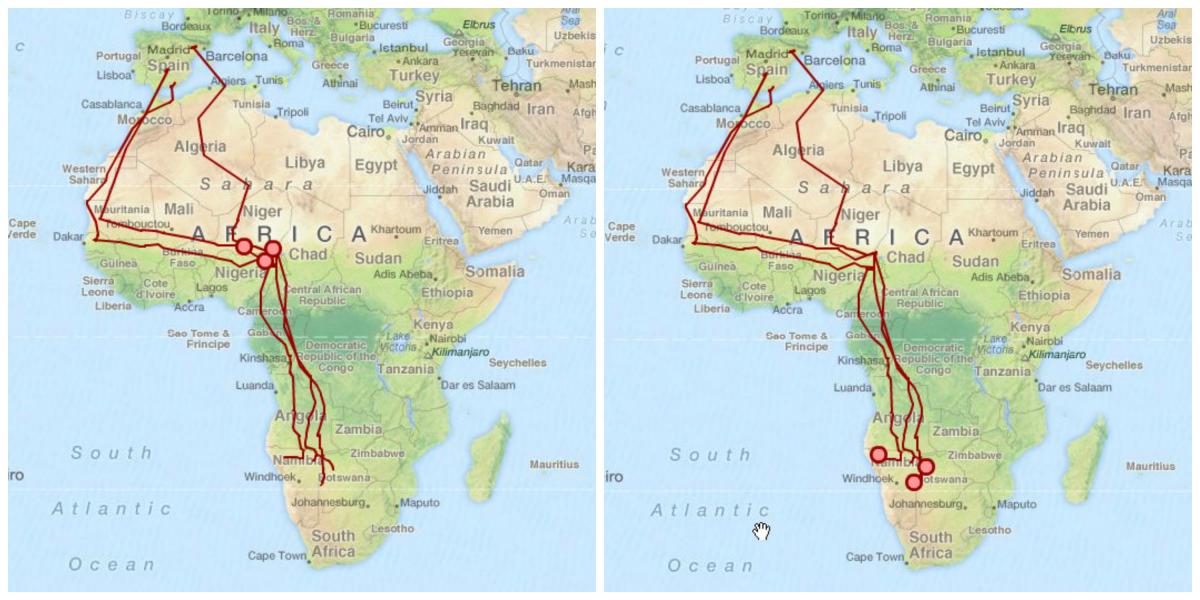 The Spanish rollers spend a month and a half in the Sahel belt, starting in the middle of September, reaching  southern  Africa by the beginning of December.

Interestingly the Spanish rollers spend a significant amount of time in the Sahel belt, they stay there from mid-September till the end of October. (You can watch the journey of the Spanish birds on an animated map on the http://www.migraciondeaves.org/en/ website.) The birds then spend November flying across the tropical rainforest region to reach northern Botswana and Namibia. 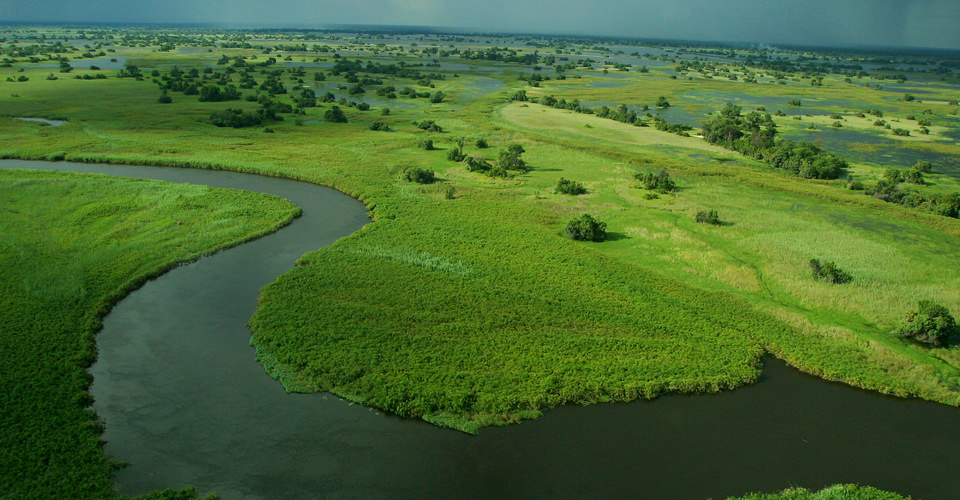 The Okavango delta in Botswana is a perfect wintering ground for rollers (Photo: David Luck).

The migration behaviour of the Spanish, and probably also the Hungarian roller populations is governed by the constant urge to find wintering habitats with rich feeding opportunities. The rainy season in the Sahel belt lasts from July to September, so rollers are welcomed by a lush green savannah by the time they reach Chad. As the dry season sets in at the end of October, the birds migrate further south.  The rainy season of  southern Africa’s semiarid zone (such as the northern parts of Namibia and Botswana), north of the Kalahari Desert begins in November and lasts till March, providing the rollers once again with suitable habitat. Before the dry season approaches in April, the birds return to their European breeding grounds. 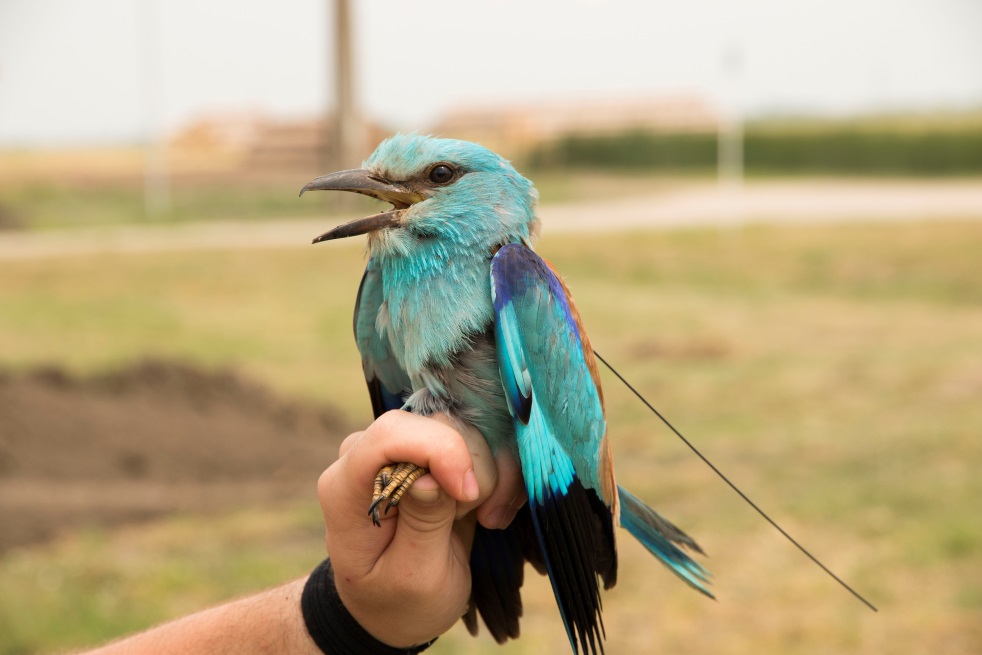 “Pétör” equipped with a satellite transmitter.